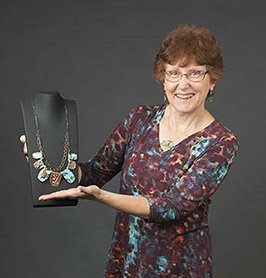 Creativity is always happening at the Studio!

Being a Coppersmith has allowed me to work with a metal that is warm and giving when forming, patinating and texturing it. Don’t get me wrong, I also work in silver and brass, but copper is my favorite metal, the one I go to first when designing jewelry.

Firelight Designs was born in a small studio in an extra room in a house in Spokane during 2000. My work has evolved and developed into what you see today, just as I have personally grown in how I perceive nature and the world around me. Living in the San Juan Islands affords access to nature in all of its forms which is then transformed to my work.

A degree in Art History has shown me the evolution of art, form and function across many applications; studying scientific illustration brought me closer to nature. Starting as an oil painter learning old masters’ techniques, learning and practicing with watercolors, mixed media, and ultimately jewelry design have been steps along the creative path. I still draw and paint, and so in jewelry designs I attempt to bring color, movement, texture, form and other elements into a three-dimensional creation. Currently I seem to focus on pendants and necklaces. It is an evolution so that will change!